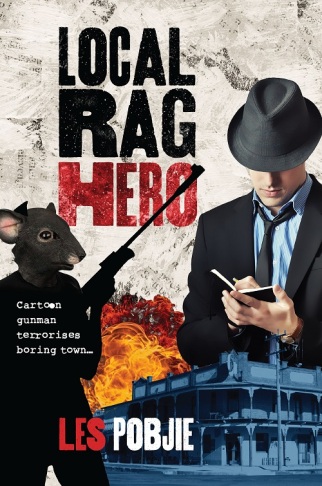 Nick Carter‘s future seemed as bleak as Oakbury’s rainy, pot-holed streets when he stepped off the coach. He had come seeking a reporter’s job, but bus chatter made it plain this was a deadly dull town with more gossip than news. Council was even planning a Boring Festival.

Then there was his accidental vandalism on the coach, witnessed by the paper’s owner whose son also wanted the job and a foolish pact with his disapproving dad that could see him back in Sydney within weeks. But a big man with a rifle and cartoon character masks has plans, too. His late-night reign of terror will shake the town and threaten Nick’s life.

The wannabe cadet reporter struggles to fit into a weird new world where hoaxes, humiliations, a burning pub, suspected explosive sausage and being shot become part of a day’s work. All that, plus balancing relationships with Sally, who keeps finding him unconscious at her feet, and feisty colleague Belinda.

Who will win his heart? Will the vengeful owner’s son end his career? Will he survive long enough to discover who’s behind the cartoon masks? And will Oakbury ever again be deadly dull, instead of flat-out deadly?

Available as paperback (350 pages) and ebook at Amazon, Book Depository, iBooks, Kobo and Smashwords, among others.

More Murmure in the Night

It was a matter of much regret to Henry Thomas that he didn’t discover he had a super power until he was 95, in hospital, on his death bed.

One of 12 new stories in the sequel, More Murmurs in the Night

In ebook and paperback from Amazon, Booktopia, Book Depository, iBooks.